In memory of Robert William Parry 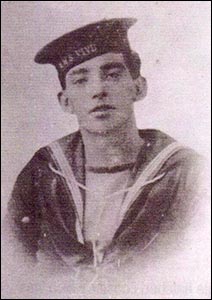 Robert Willie Parry was brought up in Y Felinheli. His parents were Owen and Margaret Parry, who lived at 8 Brynffynnon Road, writes great nephew Rennie Roberts.

He joined the Royal Navy and was acting leading stoker on the armoured cruiser HMS Defence during the First World War. He last saw his parents during home leave in May 1916. On 16 May his cousin, Sophie Parry, wrote him a four-page letter from her home in Bootle, Liverpool, in which she scolded him for not visiting her during his leave.

Later that month, Robert’s ship was sunk during the Battle of Jutland, off Denmark, on 31 May 1916. The entire crew of 903 was lost. Robert was 26 years old. He is commemorated on the Plymouth Naval Memorial.

Sophie Parry’s letter to Robert was returned to her by Mr AH Olson, of Bohus, Sweden, with a covering letter dated 27 June 1916. Mr Olson explained: “I have picked up at sea a hammock mark (R.W. Parry) and bed and an overcoat and in the pocket was this letter. I will send it back to you. God Bless all English People.”