In memory of Ronald Vincent Turner 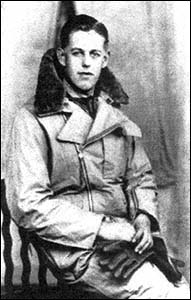 Ronald Vincent Turner was a musician who had great prowess on the violin, writes Phillip Jones. He was the only son of George Stanley Turner and Elizabeth Turner, who lived in the Oaklands area of Builth Wells. Ronald was a keen member of the local Scouts group, where he gained the King’s Scout award.

Enlisting in the RAF in 1940, he trained and became a pilot. After a tour of operations on Wellington aircraft, he attained the rank of Flight Sergeant. While resting from operations, he was granted a commission and became a Pilot Officer in July 1943. He subsequently flew six operations with the Royal Australian Air Force’s 467 Squadron.

Ronald’s wife Elizabeth Eleanor Turner gave birth to their daughter while he was away on service. Ronald never got the chance to see the baby, because on the night of 3 September 1943 his Lancaster bomber, DV237, was lost during a raid on Berlin. He was 23 years old.

At the war’s end, it was established that the aircraft had crashed at Berlin-Jungfernheide, east of Siemensstadt, south of Tegel. Ronald and his comrades who died were buried at Döberitz. After the war they were reburied at the Berlin 1939-1945 War Cemetery.

With thanks to the late Eddie Turner, a relative of Ronald