In memory of Thomas Hugh Owen 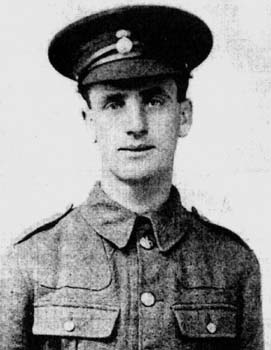 Thomas Hugh Owen’s parents, Mary and Hugh, lived in Tŷ Tŵr (“Tower House”), just below the Marquess of Anglesey’s column on the southern outskirts of Llanfairpwll. 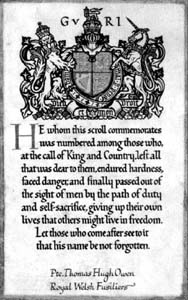 He was one of the first to join the 15th Battalion of the Royal Welsh Fusiliers, and went to France as a Private with the British Expeditionary Force. He died on 1 March 1916. His grave can be seen at Guards Cemetery at Cuinchy, in the Pas de Calais region.

Soon after his death, Capt W Allen Howells, of A Company, wrote to Mrs Owen, offering sympathy for her son’s death. “He was devoted to his work, a fine example to all the men,” he wrote of Thomas. “It will be consoling for you to know that he died nobly – ‘without fear’. A son to be proud of.”

Thomas’ memorial scroll, pictured right, urges those who come after to “see to it that his name be not forgotten”.