In memory of William Ernest Williams 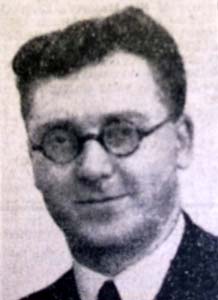 iam Ernest Williams enlisted in the RAF in 1941 after leaving his job as manager of Llandudno-based furnishers Dicken & Son of Vaughan Street, writes Adrian Hughes. He had worked for the company since joining as an apprentice aged 17. He was a founding member of Deganwy’s Toc H Club. Toc H was a network of social clubs which grew from the original facility on the First World War battlefields.

The RAF sent him to the USA for six months’ training. After much operational flying with Coastal Command over the Bay of Biscay, France, he joined 101 Squadron of Bomber Command.

On 14 February 1943 he was navigator of a Lancaster bomber which took off from Holme-on-Spalding in Yorkshire and took part in an attack on Milan. After successfully bombing the target, the plane was attacked by an enemy fighter at close range. Four incendiary devices that were still in the Lancaster’s bomb bay were ignited.

The machine-gun bullets also penetrated the starboard engine’s petrol tank and damaged the bomber’s intercom. Seconds later, the port engine caught fire and the pilot put the aircraft into a steep dive to extinguish the flames, levelling out at 240 metres above the Italian countryside. Meanwhile Sgt Williams, with the help of the others, extinguished the fuselage fire.

The pilot managed to haul the crippled bomber up to 4,700 metres to cross the Alps, but further problems arose with the starboard outer engine and he was forced to lose altitude and steer between the peaks rather than fly over them. Navigator Williams received no wireless aid until he reached the English Channel, and so for more than five hours he navigated solely by astro readings. So as not to violate Swiss territory, he navigated around the neutral country. For his skill he was awarded the Conspicuous Gallantry Medal.  Only 112 airmen were awarded this decoration in the Second World War.

On returning to the RAF after special leave, Sgt Williams was aboard a Lancaster on a test flight on 20 March 1943 when the tail wheel struck a concrete pill-box on Hornsea beach, Yorkshire. He and nine other airmen were killed instantly. He was buried on the Great Orme with full military honours. His Commanding Officer described him “as a gallant gentleman”.

Back to listing page (Conwy Cenotaph)