In memory of William Evans Jones 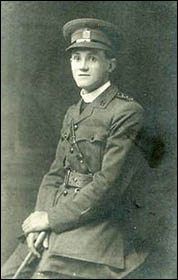 William Evans Jones lived at Tyddyn Sion, near Pwllheli, and later at Rowen Cottages, Y Felinheli. His parents were David and Eliza Evans Jones. He had a sister called Jennie, who served in the Women’s Army in the First World War.

He was educated at Ysgol Clynnog and Ysgol y Gwynfryn, Ammanford. In September 1914 he began a course at the Baptists’ college in Bangor, but broke off after three months to join the Royal Welsh Fusiliers. He later explained: “Not all of us as students are of the same opinion, but I believed that my ties to my country and to the big principles of freedom and justice called on me to join the army.”

After training in Llandudno, he went to France in December 1915. There he was wounded in his right hand. Unable to handle a gun, he was discharged from the army. He returned to the college in October 1916 and was ordained in May 1917 at Caersalem Chapel, Caernarfon. 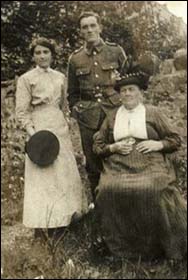 Within weeks, he had returned to the army as a chaplain. He was known there as the “Baby Padre”. He took it upon himself to ensure the men of his brigade who fell were properly buried. When many of his fellow Welshmen died during an offensive near Gouzancourt, he collected their bodies for burial at a roadside spot which he named “Arfon British Cemetery”.

He returned to Y Felinheli in August 1918 for his father’s funeral. The family photo on the right was probably taken during that visit.

One of his comrades later recalled that his father’s death was a heavy blow to him, and on returning to the brigade he became more fearless and daring.

On 8 October 1918 he insisted on proceeding to the front line with his brigade near Villers-Outréaux. While bending in prayer over a wounded soldier, he himself was caught by gunfire. He was hit in the head and died instantly, aged 24. He is buried at Prospect Hill Cemetery, Aisne, France.