In memory of Wynne Williams 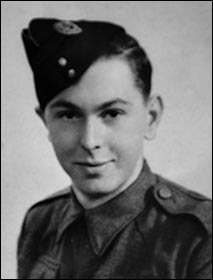 Wynne attended Bwlchgwyn School, where he enjoyed growing vegetables in the school garden and woodwork.

During the Second World War  he was “called up” and joined 220 Field Company, Royal Engineers, which was  attached to the 56th London Infantry Division. It was nicknamed the Black Cats after its shoulder patch insignia (pictured below right). This showed a Black Cat on a red background (based on Dick Whittington’s cat). 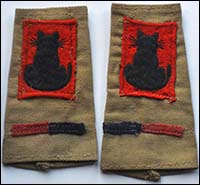 The Division sailed from Britain to what is now Iraq, where it was tasked with guarding oilfields. It then travelled some 3,700 km (2,300 miles) by road to Egypt during March 1943. After crossing the Western Desert to Libya, they were in action in April at Enfidaville and in May at Tunis.

The Division crossed the Mediterranean and landed at Salerno, Italy, in September 1943. It was involved in several battles from then until January 1944, after which it tr

ansferred from X Corps to the US VI Corps at Anzio. The division fought in the battle to secure the bridgehead, sustaining heavy casualties. It was withdrawn from Anzio to Egypt in March 1944 and later to Gaza, Palestine. There Wynne was wounded. He died in a field hospital on the following the day, 7 July 1944, aged 21.

He is buried in the Ramleh War Cemetery in Israel. His medals (pictured left) comprise the 1939-45 Star, The Africa Star, The Italy Star, The Defence Medal and the 1939-45 War Medal.