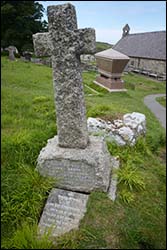 On this family plot is a stone commemorating Second Lieutenant Guy Everingham, who was the 39th victim of the German fighter pilot known as the Red Baron.

Guy was born at Barry Dock, South Wales, the son of a clerk. The family moved to Northumberland, then Cardiff and then Newtown, Montgomeryshire, where Guy worked as a motor mechanic.

Three months after the outbreak of the First World War, Guy enlisted in the 13th Battalion of the Royal Welsh Fusiliers and came to Llandudno, where the regiment was training at the time. This is probably where he met Gladys Brown of St David’s Place, whom he married at Holy Trinity Church in the town in 1917.

In February 1915, Corporal Guy Everingham was commissioned as an officer with the rank of Second Lieutenant. He left for France in March 1916 and was a signaller there, before being put in charge of a trench mortar battery. Later that year he transferred to the Royal Flying Corps.

Guy Everingham was killed in action aged 22 on Easter Sunday 1917 while an observer in a biplane flown by Second Lt Keith Ingleby MacKenzie. They were photographing the German lines prior to the Battle of Arras when they were shot down by Baron von Richthofen, the Red Baron. They were buried where they fell and later reinterred at Bois-Carre British Cemetery in France.

Guy Everingham’s brother Robin was killed at Gallipoli in 1915 and both are remembered on the war memorial at Llanidloes, Powys.