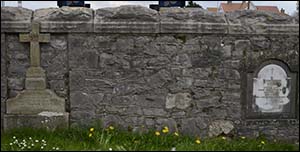 To the west of the churchyard entrance you can see two memorials set into the wall. The bodies of the people named on the memorials lie outside the church, underneath the highway. The perimeter wall was rebuilt a little further north in the early 1930s, when the road was widened and straightened. These graves were left undisturbed.

The memorial nearest to the gate is the relocated headstone of the grave of Thomas Taylor of Pensarn, who died in 1883 aged 45. His mother, Susan Davies, was buried in the same plot in 1890. She died aged 87.

The white memorial to Joseph Lunt was created as the road scheme got under way. It records that he was “buried near to this stone” on 30 April 1927, aged one month.