In memory of Ewell Daniell 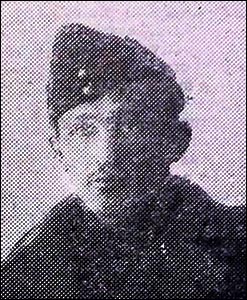 Ewell Daniell was born in Winnipeg, Canada, in 1890, writes Adrian Hughes. His connection with Old Colwyn was a romantic one.

At the outbreak of the war, Ewell sailed for Britain in to enlist in the British Army. After his ship had docked in Newport, he went to the local recruiting office and enlisted in the 11th battalion of the South Wales Borderers.

The Borderers moved north in December 1914 for six months’ training. During that period, Ewell met Hilda Whitley at St John the Baptist's Church in Old Colwyn. They fell in love and were soon married. They lived at Gwynfryn on Wellington Road in the village. Hilda’s father sang in the church choir and was the local Conservative Party agent.

Daniell transferred from the South Wales Borderers into the Royal Flying Corps at Farnborough. His promotion was rapid, and from second air mechanic he soon became first. Then he qualified as a First Class pilot and an instructor. His Commanding Officer remarked he was the best instructor he had ever had.

On 3 November 1916, Flight Sergeant Daniell was instructing Flight Corporal J A Luck of Ramsgate, Kent. They were flying at 80 feet with Corporal Luck in control when the steering rod broke. Daniell tried to wrestle the controls from Luck, who would not let go of them as he was so scared, and the plane came crashing to earth. Both survived the crash but died a few hours later in hospital.

Ewell was 26 years old. His body was returned to North Wales. His coffin, draped in the Union Flag, was placed on a gun carriage and drawn by four horses from the family home to the cemetery on Llanelian Road in Old Colwyn where he was given a full military funeral.