This war memorial was unveiled in July 1922 to commemorate the local people who died in the First World War. The names of Second World War dead from the area were added later. To discover who they were, choose a category below.

Our lists include details of several servicemen who are not named on the war memorial but died in those wars and had connections with Llandrindod Wells.

The figure of a soldier which tops the memorial was created by Benjamin Lloyd, a renowned sculptor whose studio was in Rhayader.

The photos show the war memorial’s unveiling ceremony, on what was evidently a wet day. Also shown here (courtesy of Phillip Jones) is a copy of the letter and form, dated 3 February 1919, which was sent to householders urging them to contribute to the town’s “war memorial and recognition fund”.

With thanks to Phillip Jones, author of ‘Early Birds and Boys in Blue’ (a history of Radnorshire airmen) 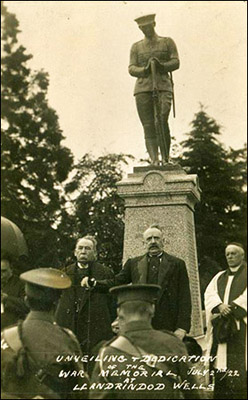